The main body of the glass fermenter is made of stainless steel, usually with a turbine agitator. The connection between the stirring shaft and the tank should be aseptically sealed. The bottom of the tank is provided with an air distributor or nozzle, and the sterile air passing through the air filter is blown into the culture solution from a porous tube with a diameter of several millimeters. The stirrer is driven to rotate at a certain speed by the stirring motor placed on the top of the tank, and the swollen air is broken into small bubbles by the liquid vortex and shear force generated by the stirring turbine, which are evenly dispersed in the culture medium. In this way, the oxygen required for cell growth is provided, and the concentration of the culture medium is uniform at the same time. The charging coefficient of glass fermentation tanks is generally 70 to 80%. The system is usually also equipped with defoaming device, parametric test element, coil or jacket cooling device, etc.

Glass fermenters are suitable for most biological engineering, and have the following advantages: easy to control pH value and temperature; more research on industrial scale-up methods; suitable for continuous culture. The disadvantages are: the power consumption of stirring is relatively large; the structure is relatively complicated, it is difficult to completely disassemble and clean, and it is easy to contaminate bacteria; 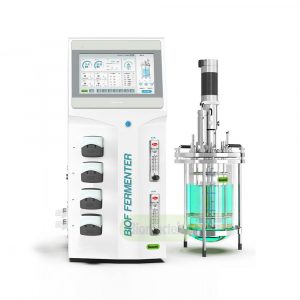 The stirring system of the glass fermentation tank consists of a motor, a gearbox, a stirring shaft, a stirring paddle, a shaft seal and a baffle. A brief introduction is given below.

The motor and gearbox are placed outside the tank. For small glass fermenters, single-phase electric motors can be used, while large glass fermenters are generally three-phase motors. For large glass fermentation tanks, since the speed of the motor is generally much higher than the stirring speed, the speed must be reduced through the gearbox. The laboratory small glass fermenter can be continuously variable and does not require a gearbox. In batch culture, each stage of cell growth has different requirements for shear force and oxygen transfer. In order to reduce power consumption, it is best to use an adjustable speed motor.

4. Shaft
Seal The main function of the shaft seal is to prevent microorganisms in the environment from invading the glass fermenter and the leakage of the culture medium. Mechanical transmission parts are often one of the main causes of bacterial contamination, so the key to shaft seal design is to avoid bacterial contamination and leakage, and aseptic sealing materials should be used as much as possible.

5. Guard
In order to prevent large vortexes on the liquid surface during stirring, and to promote the mixing of fluids in the tank in all directions, the baffle is also installed on the tank body corresponding to the stirring paddle. The baffle is designed to satisfy the “full baffle condition”. The so-called full baffle condition means that when a baffle or other accessories are added to the glass fermenter, the stirring power is no longer increased. The number of baffles is usually 4 to 6, and the width is 0.1 to 0.12D. The full baffle condition is the minimum condition to achieve the elimination of liquid surface vortex. 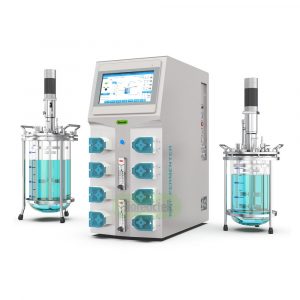 Tags:structure and composition of the stirring system of the glass fermenter
previousWhat are the advantages and disadvantages of biological fermenters?
nextA brief introduction to the multi-joint glass fermenter